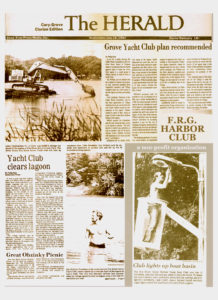 The Harbor land was platted in 1906 as a beach lot for people in the Fox River Grove subdivision. Sometime between 1906 and 1950 this property was misused as a dump to the point it was described as “the dump”.

In the late 50’s, some members of the FRG community joined together to clean up the area creating the existing baseball fields and the harbor. An early Yacht club existed until interest declined in the early 1970’s. The harbor sat idle until 1981 when a young ambitious FRG resident named Jim Wilford along with several other residents joined together and formed the Fox River Grove Harbor Team. At the time, the Village requested that the Harbor Team incorporate as a non-for-profit boat club and assume responsibilities defined in a lease agreement with the Village.

Before a single boat could enter the Harbor, 250 tons of silt had to be dredged from the mouth. The Team spent countless hours with the Illinois EPA, Department of Waterways and the Army Corp of Engineers to ensure that every protocol and regulation was met. Since then, a formal set of bylaws have been drafted and enacted by the Harbor Team. Docks were initially purchased and installed individually by the members of the Harbor Team, and at the time, every dock was different in size, shape and methodology of construction (some floating, some fixed). Since then, the harbor has been re-dredged, and the docks have been completely rebuilt in a uniform fashion (now all floating) and re-anchored uniformly to provide a beautiful setting to Lion’s Park.

The standards that Mr. Wilford has set at the onset for this nonprofit organization has instilled the Harbor Team with great pride for what they give back to the community of Fox River Grove. In addition to shoreline restoration, which has saved the Village hundreds of thousands of dollars, the Harbor Team generously donates to local charities, the FRG Fireworks Fund, local parades, picnics and other Village events.

The Harbor Team looks forward to strengthening the relationship with our community by doing all we can to keep this “Team” moving forward for generations to come!